On October 25, 2022, we were privileged to talk about the Clergy Consultation Service to students and others at Bradley University in Peoria. Pat attended in person, while D.A. spoke via Zoom from Calgary. Dr. Amy L. Scott, director of Women’s and Gender Studies, and instructor Natalie Jipson hosted and introduced us. In spite of its being a very rainy day, there was a huge turnout of very engaged students who asked great questions. Thank you all so much for a great afternoon! 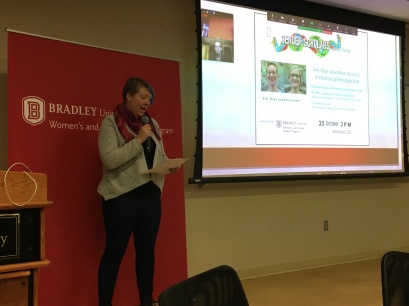 On September 26, 2019, Pat spoke about the book in our old stomping grounds, at the Kalamazoo Public Library. It was a wonderful turnout, with lots of old friends and many students from Kalamazoo College, but it turned into an episode of “Diagnosis.” If you watch KPL’s YouTube video, you’ll notice that they’ve kindly edited out the moment when Pat took a funny turn and wound up giving the rest of the talk from a chair. Not to worry, Pat is perfectly fine now, but at the time she felt faint, saw sparkles, and, by the end of the talk, started losing words in a most distressing way. (Apologies to the folks who asked great questions and received muddled answers!) An hour later, Pat was okay. Last week her doctors viewed the video (!) and pronounced the episode a migraine, nothing more serious. Thanks to Kevin King of Kalamazoo Public Library and everyone present, who couldn’t have been more kind! 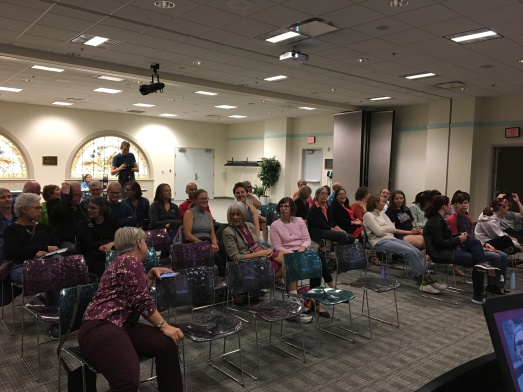 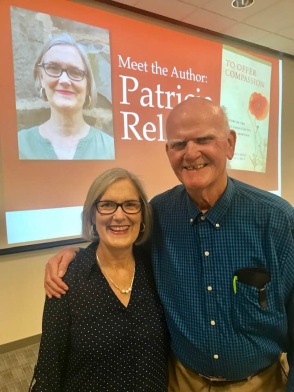 Our writing friend Bonnie Jean Feldkamp was in Cleveland recently to teach a workshop at Literary Cleveland’s Cleveland Inkubator 2018. It was a treat to have Bonnie here–and to sign our books for each other. Bonnie’s essay in the Laugh Out Loud collection is called “Being Graceful Isn’t Everything.”

Nearly a year since the release of our book, April was a wonderful month for reunions with some of our very favorite people. In New York City, D.A. and Pat attended Sunday service at Judson Memorial Church on April 15, 2018. There we had a chance to see the wonderful Abigail Hastings, who helped us so much with the research for our book, was Howard Moody’s right hand in writing his book A Voice in the Village: A Journey of a Pastor and a People, and who is at the heart of Judson’s congregation. The next day we paid a visit to Lorry Moody at her new Village apartment-with-a view. And on April 25, Pat caught up with Dr. Willie Parker in Cleveland before his speech to 800 supporters of Planned Parenthood of Greater Ohio. Dr. Parker preached at last year’s celebration of the 50th anniversary of the Clergy Consultation Service at Judson. 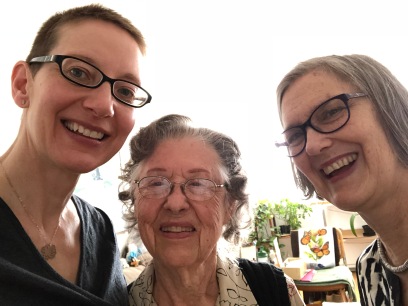 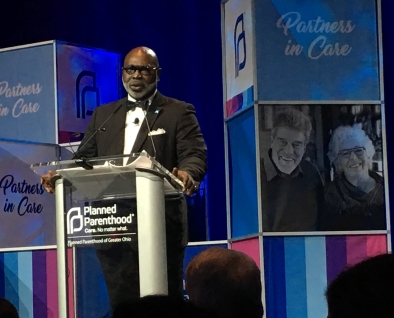 Pat spoke at Preterm Cleveland on Monday, August 14, 2017. The friendly audience (sorry, no photo–D.A. remembers to take audience pictures) included a Presbyterian minister who was a member of the Cleveland CCS starting in 1970. He recalled sending women to a doctor in Royal Oak, Michigan. Thanks to Cristina from Preterm for all the arrangements and a warm welcome, and to Freddy and Melanie of Loganberry Books for making our books available. 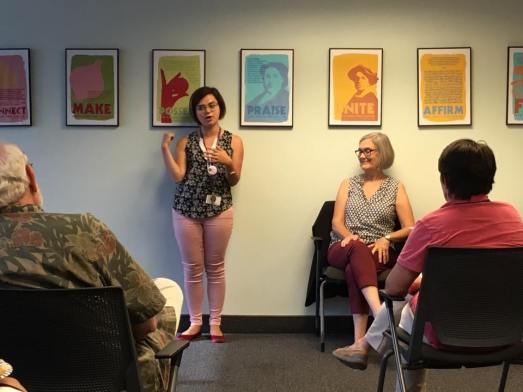 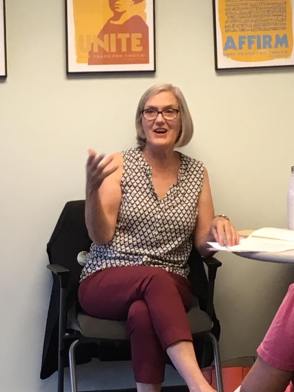 One of our favorite bookstores, Loganberry Books in Cleveland, hosted us on Sunday afternoon, July 9, 2017. (You may remember seeing internet postings when Loganberry celebrated Women’s History Month by turning books by men spine-in on the shelves.) It was a treat to speak surrounded by walls of great books, while an audience that included family and friends (Pat’s grandson made a guest appearance) sat in cozy chairs. Thanks to Carmen, Paul, Sarah, Freddy, and of course Harriet of Loganberry for all the arrangements. Loganberry will again make books available when Pat speaks at Preterm in Cleveland at 6 p.m., Monday, August 14. 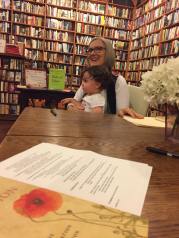 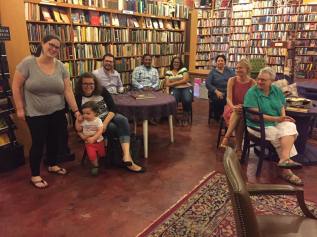 The American Civil Liberties Union was a critical part of the success of the Clergy Consultation Service on Abortion. In 1967, NYCLU lawyers advised the founding clergy on how to minimize their legal risk: by referring women out of state, not accepting money, and treating their referrals as an ordinary part of their pastoral counseling, not clandestine in any way. Those warnings served the group well, resulting in only two criminal charges and no convictions for a network of close to 3,000 counselors. So it was a privilege to be invited to speak at the ACLU of Ohio on July 6, 2017, to an audience that included many of the region’s greatest activists on behalf of reproductive justice. Thank you to Jocelyn Rosnick, assistant policy director of the ACLU of Ohio, and all her staff for inviting us and treating us so kindly. It was also an honor to meet Ohio ACLU’s new executive director, Ben Guess–himself a UCC minister–as well as just-retired executive director Chris Link, a long-time advocate and activist for reproductive rights. And we were thrilled to meet Mickey Stern, staunch activist and founder of Preterm clinic in Cleveland. Thanks to Loganberry Books for making our book available, and to all who attended! 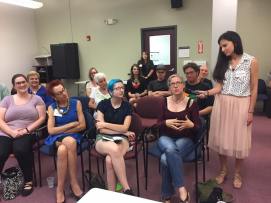 It was a special honor to speak on June 26, 2017, in Kalamazoo, the place where we started and did most of the work on our book. Planned Parenthood of Michigan and First Congregational Church co-hosted the event, and the audience was filled with friendly faces, some of whom had been cheering us on through the entire 15 years we worked on the project. Huge thanks to Cherie Seitz and Cheri Bell of Planned Parenthood and Rev. Sarah Schmidt-Lee of FCC for welcoming us so royally, and to Bookbug for making our book available–and taking orders when they sold out! A team of wonderful Planned Parenthood volunteers was on tap to offer information on health concerns as well as current legislative issues. Thank you to Jack Sizer, Scott Murray, and others who took these photographs. A great evening! 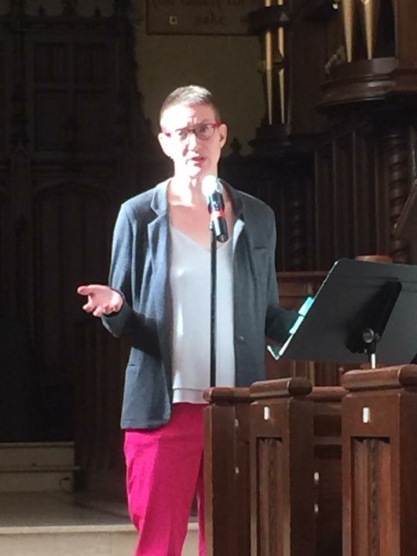 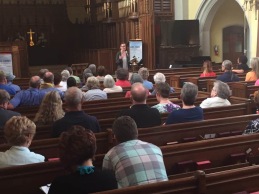 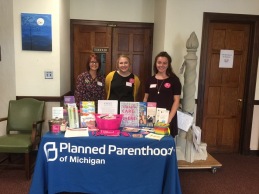 For a June 22, 2017 program at the Seminary Co-op Bookstore in Chicago, D.A. Dirks talked with Sandra Sullivan-Dunbar (below, left), associate professor of Christian ethics at Loyola University Chicago, about the Clergy Consultation Service on Abortion. D.A. was delighted to find among the audience a good friend of the late Rev. Dr. Spencer Parsons, chair of the Chicago CCS.

A few more photos from the 50th anniversary of the Clergy Consultation Service on May 21 and 22. At left, Rev. Donna Schaper, senior minister of Judson Memorial Church. Rev. Schaper, as a seminary student, was a member of the Chicago CCS. Next, we’re speaking with Rev. Robert Hare, one of the very few clergy to face legal charges as a result of abortion counseling. In the third photo, Rev. Peggy Howland–among a large audience of us–is listening to Monica Simpson, executive director of SisterSong, who gave a powerful message at the May 22 session on how we can move forward. And, finally: Does your congregation distribute free condoms in rainbow colors? If not, why not? Thank you, Judson Memorial Church, for all of the ways you offer compassion and justice.

It was a privilege to celebrate the 50th anniversary of the Clergy Consultation Service on Abortion at Judson Memorial Church in New York with some of our heroes. Dr. Willie Parker, an abortion provider in the deep south, a Christian, and a national activist, preached on Sunday morning, May 21, 2017. (Click here for video of the sermon.) Rev. Finley Schaef, co-founder of the Clergy Consultation Service, spoke about how he became involved. We spoke briefly that afternoon and answered questions as part of a panel that included Dr. Parker and scholar Gillian Frank. An inspiring and historic day with many mighty people.

Photo at lower right courtesy of Rev. Peggy Howland, another mighty member of the Clergy Consultation Service who continues to fight for reproductive justice.

At A Room of One’s Own in Madison, Wisconsin, April 27, 2017, for our very first book event. Such a wonderful store, and we enjoyed speaking next to the Dogs section! (Love that Dogist book.)